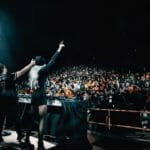 Just one week after releasing his highly anticipated collaboration with William Black, “Worth It”—the surprise final single in the run up to Black’s Pieces album—Nurko returns with another masterclass in melodic-bass. This time, he’s teamed up with Chandler Leighton for “Disappearing Now,” out now via Proximity.

A pairing of Leighton and the New Jersey-based producer only seemed natural after the former got her start working with melodic-bass trailblazer ILLENIUM on the euphoric but dark “Lonely” from his Ascend album. The lyrics are deep and cut right to the core before two signature melodic drops from Nurko build to a final drop where Nurko really flexes his variable production chops. Our 2021 Artist to Watch has certainly lived up to the billing and is only going to keep that momentum going into 2022 with his recently announced EP on the horizon, led by “Disappearing Now.”

Nurko is fresh off his Red Rocks debut, where he opened for ILLENIUM, bringing out Leighton herself and sending the crowd into a frenzy with a live performance of their new song. Nurko’s upward trajectory shows no signs of slowing down, with dates in the next month at Insomniac’s Audiotistic San Diego, ILLENIUM’s Ember Shores, and 2022’s Ubbi Dubbi festival. Listen to “Disappearing Now” below.